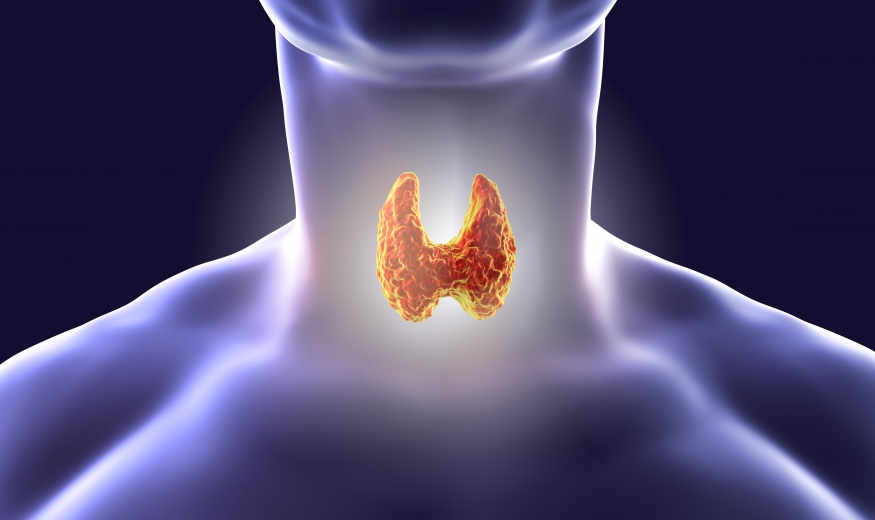 The thyroid gland is one of the largest endocrine glands in human body. It is placed in the neck so that it is easily accessible for physical examination and various imaging methods. The production of its hormones affects a number of processes in the human body. The thyroid gland controls the growth and metabolism of the whole organism.

Thyroid diseases are the most common problem of the hormonal system and make up 80-90% of the activity of endocrinological workplaces.

The most common thyroid diseases include:

- GOITER - ENLARGEMENT OF THE THYROID GLAND

- INFLAMMATION OF THE THYROID GLAND

GOITER - ENLARGEMENT OF THE THYROID GLAND

THE MOST COMMON CAUSE OF GOITER IS IODINE DEFICIENCY, WHICH CAUSES THYROID DISEASE IN ABOUT ONE BILLION PEOPLE ON OUR PLANET. (Luboslav Stárka, Václav Zamrazil et al., Basics of clinical endocrinology 2nd extended edition, 2005, isbn 80-7345-066-6, p. 82)

The incidence of goiter has increased in the population, in recent years.

Enlarged thyroid gland is visible, palpable, its sensitivity is also assessed, vocal cord problems - a change in voice is typical, in more advanced stages it is possible to observe pain or discomfort in the throat, problems with swallowing or breathing.

Hyperthyroidism is a complex of diseases whose common feature is a lack of thyroid hormones in the body. The disease usually develops slowly and inconspicuously, so the patient and his surroundings do not consider it necessary to vistit a doctor. The disease is currently relatively common, especially in some groups of the population (middle-aged and older women).

Overactive thyroid gland is a syndrome characterized by increased secretion of hormones and a concomitant tissue response to this increased secretion. We include several diseases in the category of increased thyroid activity. The causes of these diseases are different, with the clinical picture having some components in common, others being characteristic of individual diseases. Common manifestations of hyperthyroidism are represented in patients differently according to the severity of their disease and according to age. Overactive thyroid gland is often associated with autoimmune diseases of other endocrine glands. A relationship to helicobacter infections is also evident.

INFLAMMATION OF THE THYROID GLAND

Inflammation is often associated with thyroid dysfunction and is sometimes a serious diagnostic problem. Causes of inflammation include bacterial or viral infection, thyroid irradiation, mechanical damage. Sometimes the cause may be the result of an autoimmune process that sometimes affects other organs and systems along with the thyroid gland.

A node on the thyroid gland can be characterized as a solid or fluid-filled lump of tissue. For the most part, these nodes are not a major problem, but 5 percent of palpable nodes can be a malignancy. On the other hand, the formation of nodules is often associated with a malfunction of the thyroid gland, or it may be a harbinger of disease. Nodules of larger sizes can be recognized on the neck as a slight swelling, or they can cause problems with breathing or swallowing.

THE MAIN CAUSE OF NODULES IS AGAIN A LACK OF IODINE IN THE ORGANISM.